skip to main | skip to sidebar

The June death of Senegalese filmmaker Ousmane Sembene aroused little notice here compared to the subsequent passing of Ingmar Bergman and Michelangelo Antonioni. There are a number of probable reasons for this neglect, though not one of them is good enough to justify it: the long interval between Sembene’s later features, the unfamiliar actors that inhabited his characters, the political thrust of his work, and, not least, the difficulty of projecting the fashionable, existential doubts of western intellectuals onto his scenarios. His pictures were well-reviewed, so it would be presumptuous and misleading to attribute this neglect to the simple racial preferences of New York taste-makers. The film canon is remarkably European, but I suspect another, more pedestrian problem than racism accounts for that: the tattered state of foreign film distribution in the United States. What is African Cinema? To most, it’s the kind of thing that’s more easily read about than experienced directly. You’re more likely to find African titles screened on decades-old VHS tapes in dingy student unions than on 35mm prints in movie theaters. With a few exceptions, like Cissé’s Yeleen or Sissako’s Bamako, these titles are released not through art house distributors but social justice outfits like California Newsreel that aim their products at library shelves instead of paying audiences. (For what it’s worth, check out Amadou Saalum Seck’s Saaraba from 1988—available only on tape at present from California Newsreel—if you ever get the chance.)

Sembene has actually fared better in this respect. Daniel Talbot’s New Yorker Films has aggressively promoted Sembene’s work throughout his career. New Yorker has been slow in releasing the films to DVD, though, so for most cinephiles his work may as well not exist at all. Hopefully recent and upcoming retrospectives of Sembene’s complete features in Boston, Chicago, New York, and elsewhere will change the situation. These screenings provide an opportunity to see Sembene’s work properly so as to test the vague assumptions that stem from the curious circumstances outlined above. For the next two months I’ll be righting my own lamentable ignorance of Sembene’s career and posting thoughts on the films as they come.
Sembene’s short Borom Sarret (1966) and his feature Black Girl (La noir de…, 1966) are famous early efforts, often cited as the first films about sub-Saharan Africans made by an indigenous filmmaker, rather than the colonialists, travelogue photographers, dubious anthropologists, and other exploiters. I don’t know of any solid scholarship verifying those claims; what’s more, Black Girl takes place mostly in France with all of the dialogue spoken in French, so, as is often the case with talented filmmakers from non-Western countries, the charge of exotic pandering to bourgeois audiences in the West is not an altogether irrelevant one. Black Girl was a success at Cannes, winning the Prix Jean Vigo and arousing a certain degree of enthusiasm about Third World Cinema.

Is Black Girl the beginning of African Cinema? That concept should be interrogated at some length before continuing the discussion of the film itself, if for no other reason than that Sembene’s handling of the political implications and ambiguities of narration, authorship, and subjectivity constitute one of the film’s more brilliant achievements. Most cultures have some strand of poetic forms, mythic situations, and visual archetypes that might broadly be called heritage. These elements, their appearances traced backwards until the point of obscurity, are the ones sought out, rightfully or wrongfully, when trying to determine whether a work is an authentic expression of a culture or an unctuous and contaminated attempt to cash in. So we talk about national traditions of literature and music and theater and painting. But the cinema has been an international medium from the start—invented almost simultaneously in France and America and farmed out to other territories at the whim of the patent-holders. To say that any film does not follow a national tradition either overemphasizes the autonomy of the national film industries or misplaces film products in a longer trajectory of art-making for which they might not be fit. Today even American films are scarcely that, for they are shot anywhere around the globe, often with significant monies from multinational corporations and other ambiguous sources. And festival favorites from the last twenty years, whether officially from Iran or Taiwan or Romania, were often funded by pan-European art patrons like France’s Marin Karmitz.

In this context, it seems appropriate to situate Sembene in a broader history of cinema (Western and otherwise) rather than treating his work as if it were sui generis. This approach instigates comparisons both natural and fanciful. With Black Girl, then, Sembene aims to do the same thing as his contemporary Godard. Both critique the banality of bourgeois life in France. The obvious difference between Black Girl and a work like Pierrot le fou or 2 or 3 Things I Know About Her is that Sembene makes the critique from without rather than within. His film is more piercing than those others for this reason and because he need not cite Brecht or Marx to prove his point.

No film I know assays the blandness of middle-class life as such an effective and intelligent cudgel against complacency. Most of the film unfolds in an unadorned, middle-class home in France. Its walls are free of texture or character, the only decoration being a tribal mask the titular Diouana bought for fifty francs. Most shots are aggressively empty, a character posed in the corner against the blankness of the foreground. The lighting is flat and ugly, losing Diouana’s face in an undifferentiated haze of shadows. The contrast with Diouana’s village is a simple one, crude but no less rich—essentially an equation of aesthetic depth with spiritual fulfillment. In Africa the sunlight sculpts her face, revealing nuances literally illegible in France. The two locales, as distant in expressive possibility as in geography, provoke wholly different avenues of interaction: in France, the pattern of a dress or the shape of a pair of high heels constitute a character’s only means of defining herself and judging others while in Africa the rich crevices and curve of the human face are the primary objects of interrogation. The implications are obvious enough, with the nature of interaction and the meaning of community in Senegal and France diverging after this essential difference.

My account of the film’s visual style suggests a banal schematic that scarcely does justice to Black Girl or Sembene’s achievement therein. This strategy is but one framework of many built atop another. Diouana’s voice-over narration gives a dramatic shape to the material but also calls its premises into question. The scenes we see in France—mundane tasks, daily rituals, hints of play, unprovoked insults—do not immediately suggest the stuff of narrative. They receive their meaning from Diouana’s narration, which drapes the scenes more than it does describe their whereabouts. Sound and image run along seemingly parallel tracks, only to intersect and then drift apart anew. In an environment of oppression, the very act of offering an alternative interpretation constitutes rebellion. The kind of subjectivity on display here recalls, in some ways, Yuwen’s narration in Fei Mu’s Spring in a Small Town (1948), an effective (and distinctly feminine) counterbalance to the fatalistic forces that dot the emotional landscape of the narrative. But Sembene attempts a more complex blending of dialogue and monologue, as in the moment towards the end of Black Girl that might be described as a kind of pirouette between competing subjectivities: an incredulous line from Robert Fontaine’s Monsieur dissolves into an interior cry from Diouana, rhyming the former’s mère with the latter’s prisonnier. This moment suggests a mysterious and poetic undercurrent that temporally intertwines opposing subjectivities, in addition to positing the competing narrators as but two possibilities within a constellation of experience. In other words, this is humanistic filmmaking of the highest order, acknowledging each party’s aspiration to agency without ignoring the limitations of each.

The efficacy of Sembene’s critique is no way diminished because he presents the French as caricatures. The husband, especially, is a canny bit of type-cast, often mugging for the camera in the half-pathetic, half-unhinged manner of Elisha Cook, Jr. He may be a competing narrator, but he does not possess substantive moral weight. He goes through the motions of narrative expectations only to confound them—taking something of a pilgrimage to Senegal after Diouana’s suicide that quickly becomes an unabashedly vulgar attempt to buy off the decay of a soul in attrition. Like his wife earlier, he shields his eyes with sunglasses, setting himself defiantly apart, attempting to appear circumspect but actually failing to disguise a thing, not least his unabashed contempt for the people and the place.

Nevertheless, Black Girl is a film of mysteries. Sembene restores the wonder of a suburban sprinkler system or a balloon caught in window-light. Objects litter the film, though many are seen long before they are understood. Towards the end of the film, we see Diouana packing a suitcase. She picks up a photograph of herself and a sleazy recruiter that was taken sometime in Dakar. We have seen the two together in a flashback—they walked along this street, but that moment hardly merited a souvenir. Only later does Sembene double back and show the photographer posing the uncomfortable couple, finally giving weight and specificity to an object rattling through time and space. It is Diouana’s task to find some semblance of the same amidst competing subjectivities and narrative frames.
Posted by K. A. Westphal at 9:54 AM

Labels: 2 or 3 Things I Know About Her, Black Girl, Pierrot le fou, Spring in a Small Town

Its one of the good oldies..I heard about this movie but never watched it.This time I think to give it a try and I find links on your blog.Tonight I am gonna watch this movie. 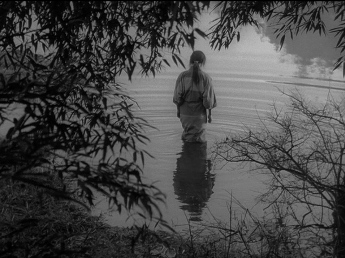 Index to Films Referenced on This Blog